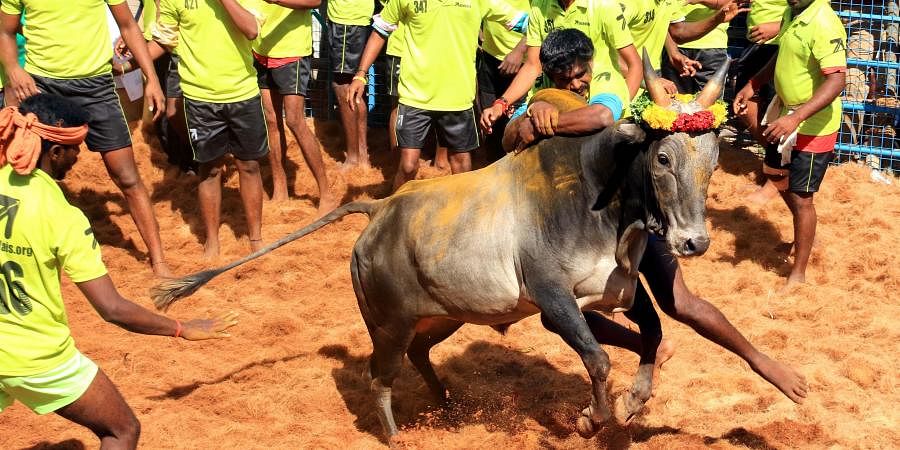 CHITTOOR: Despite ban on Jallikattu, majority of villages in Kuppam and others parts of Chittoor district have been observing the bull-taming event in the name of ‘Goppa Mylaru Panduga’ for the past few days.
Jallikattu is a bull-taming sport popular in Tamil Nadu, which shares its border with Kuppam villages.

Jallikattu was banned by the Supreme Court on May 7, 2014. However, the ban could not be implemented effectively due to the overwhelming public support for the traditional sport.

As part of the sport, a bull is released into a group of participants. Contenders need to grab the large hump on the bull’s back with both their arms and hold on as long as they can, while the bull attempts to break free from the grip of multiple participants.

It is a different matter that some of the participants, mostly youth, sustain injuries while chasing the raging bulls. At times, even spectators get hurt when the bulls charge through crowds during the event. “We have kept ambulances ready to rush the people, who get injured in the sport. We have set up barricades to prevent bulls from injuring the crowd. We have obtained permission from the departments concerned for the bull-taming sport,” said one of the organisers.

The organisers claim that this festival is a milder version of the traditional Jallikattu in Tamil Nadu, and it is not aimed at hurting the animals, but only to revere them and give everybody a chance to take part in the sport.

A series of events are scheduled to be held in Kanumapalli, Rangampeta, V Kota, Ramakuppam, Gudupalle, Ontipalle, Mittapalle, Baireddypalli and Kenamakulapalle till January 16.Even though Chittoor police have decided to act tough against this dangerous sport, they are forced to remain as mute spectators due to pressure from various quarters.

Mystic Mantra: Why do we celebrate festivals?

India’s mega shopping festivals: What is being planned and what is the impact?

Oya 2019: Sights and sounds from Oslo’s music festival, with lessons for Indian Organisers