If the jaw power could signify kingship, then jaguar is the real king of the jungle. Jaguars have the strongest jaw muscles of all the big cats. Their bite force is around 1,500 pounds per square inch (psi)  which is about three times to that of leopard.

The word ‘jaguar’ comes from the indigenous word ”yaguar” i.e. the one who kills with one leap’

Jaguars like thick, and moist tropical lowland forests with plenty of cover, but can be found in , scrub land, coastal forests, thickets and swamps. The South American continent is a tropical region with heavy rainfall throughout the year and has plenty of rivers which fall in the River Amazon. The Amazon is the largest river of this continent and has swamps along its both sides which are natural habitat for Jaguars and many other animals like monkeys, crocodiles, ant eaters, capybara etc.

Buy jaguar shirt and support us 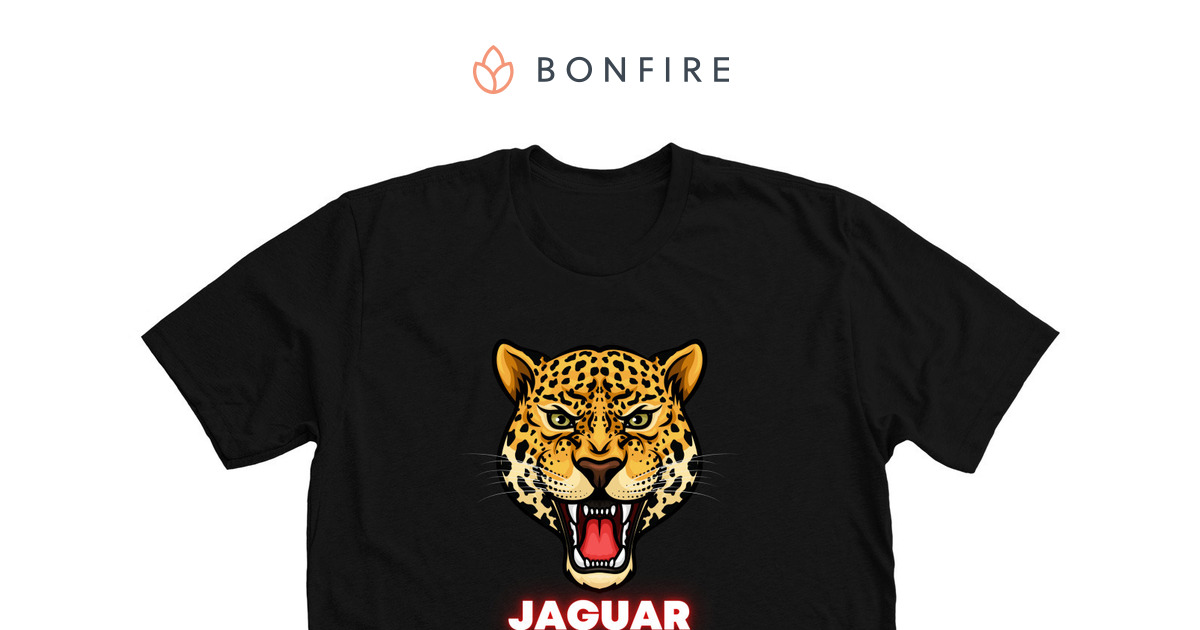 Morphological features of Jaguar and leopard are quite similar, so people often found it difficult to differentiate between the two. But here are some differences between them.

1.  Jaguars and leopards both have coats that feature rosette patterns, but jaguar’s rosettes have spots inside them.

3. Jaguars and leopards both can swim very well. Though jaguars love to spend time in the water, leopards avoid it. Jaguar hunts in water but leopard after hunting prefers to drag its victims, including larger ones, up onto a high branch.

4. Jaguar and leopard never face each other as leopard is native to Africa, parts of the Middle East, and in Asia from Sri Lanka to India, Pakistan and China while jaguar is found only in South and Central America.

5. There is also a difference between their jaw power. Jaguars have the strongest jaw muscles with bite force of 1,500 pounds per square inch (3 times to leopard)

Sometimes jaguars are also found in black color like leopards, collectively known as Black panther. They get their evenly coats from melanism, a development of the dark-colored pigment melanin in the skin or its appendages. But this is a rare case.

Jaguar is one of the most efficient hunters in entire animal kingdom and usually preys on fish, caiman, crocodiles and can break the tortoise shell with its powerful jaws. Tapirs, snakes, birds, monkeys and swines are also its favorite food. Being a powerful hunter, it plays an important role in its ecosystem and keeps the population of other animals in control.

Jaguar is an agile creature and is able to climb trees but unlike Leopord, cannot move from tree to tree.

Jaguars are nocturnal as well as diurnal animal and hunt both in the day and at night.

Jaguars mainly live a solitary life. They only come into contact with each other during mating season. Mating can take place during any time of the year. During mating season, female releases strong odor in her urine to attract the male. The male and female mate multiple times a day and after mating they depart. Parental care is only found in female, and she cares for her cubs.

Jaguar is usually a shy animal and not easily seen in the jungle so there is a very limited work done on them.

What if jaguar has a fight with other big cats?

In a fight between cheetah and jaguar, the Jaguar can kill him in seconds while  lioness in minutes.

It would be difficult to beat a lion as it has dense hairs on its neck (mane). If there is  a fight between tiger and jaguar, then tiger with its powerful limbs, claws, fighting experience, larger size will stand dominant. Just remember that jaguar has two advantages over other cats and that is its strong jaw power and it’s nature to attack the skull instead of neck. it can definately use those two forces against other cats and win.

How to survive a jaguar attack?

Jaguar rarely attacks on humans and keeps a good distance from them in the wild. There have been very few deaths reported from Jaguar’s attack till now.

If a jaguar attacks you, don’t run and do not show him your back, hold your ground, wave your arms and shout, try to show yourself bigger and more dangerous than you really are. Fight back as hard as you can.

In Mayan culture jaguar was considered as a symbol of power, ferocity, and embodiment of aggressiveness.

In today’s world jaguars are mainly hunted for their fur which is being sold in a few dollars. Due to its massive killing, it is listed as “Near Threatened” on the International Union for the Conservation of Nature (IUCN) Red List of Threatened Species.

Buy jaguar shirt and support us.